Burn brightly. Love fiercely. For all else is dust.

Every child of Glasnith learns the last words of Aillira, the god-gifted mortal whose doomed love affair sparked a war of gods and men, and Lira of clan Stone knows the story better than most. As a descendant of Aillira and god-gifted in her own right, she has the power to read people’s souls, to see someone’s true essence with only a touch of her hand.

When a golden-haired warrior washes up on the shores of her homeland-one of the fearful marauders from the land of the Frozen Sun-Lira helps the wounded man instead of turning him in. After reading his soul, she realizes Reyker is different than his brethren who attack the coasts of Glasnith. He confides in her that he’s been cursed with what his people call battle-madness, forced to fight for the warlord known as the Dragon, a powerful tyrant determined to reignite the ancient war that Aillira started.

As Lira and Reyker form a bond forbidden by both their clans, the wrath of the Dragon falls upon them and all of Glasnith, and Lira finds herself facing the same tragic fate as her ancestor. The battle for Lira’s life, for Reyker’s soul, and for their peoples’ freedom has only just begun…

*Thank you to Edelweiss+ for the free digital ARC.*

When I first began reading Jill Criswell’s debut novel, I really wasn’t certain that I was going to love it. Beasts of the Frozen Sun was… just fine, for maybe the first third of the book. But I was well rewarded for reading on.

This book’s biggest flaw is that the non-main characters simply didn’t feel as animated to me as they should have. Some character introductions and the subsequent interactions with other characters seem a bit abrupt. Quinlan, for instance, is introduced as Lira’s close male friend and someone whom Lira might or might not have feelings for, even though Lira does not mention him until his first physical appearance. Criswell often consigns minor characters brimming with potential to the sidelines, but I hope she will expand their roles in the next book. Right now it feels like she’s focusing so intently on Reyker and Lira that she’s skimping slightly on the other characters. Paying them some mind would, in my opinion, render this tale more colorful.

That’s not to say that the characters are unlikable, or that the main characters are uninteresting – just that there’s room for growth (and perhaps that’s what Criswell has planned for the sequel). While Reyker, a complicated warrior from Iseneld, embarks on a poignant and heart-wrenching redemption arc, Glasnithian Lira grapples with the societal constraints foisted upon her as both a young woman and a god-gifted individual and battles against the guilt she feels over the death of her mother several years prior. Lira’s elder brother, Garreth, proves to be noble and clever – and something of a maverick with a surprise up his sleeve, and Quinlan is a treasure – both as a friend and as a human being.

Although the lore of Criswell’s world isn’t complex, it’s not overly simple either – and that moderation suits this story. Likewise, Criswell is even-handed with her imagery: she doesn’t catapult her readers into a choppy sea of detail, but she provides enough for a reader to conceptualize the surroundings to a satisfactory degree. As far as the romance goes, this is one whirlwind love story. Despite the occasional over-gooeyness, Criswell executes the enemies-to-lovers trope well. Readers will find themselves invested in Reyker and Lira’s blossoming relationship and riveted by the parallels between their love and that of Aillira and the Great Betrayer. And at the end, the villain divulges a revelation that not only sheds a new light on his character but also leaves them bursting with questions.

Beasts of the Frozen Sun might not be a masterpiece, but it’s a solid beginning to Criswell’s series. I had some difficulty tackling the first portion of the book, but that hump was not insurmountable and the story ended up being entertaining. Adrienne Young’s Sky in the Deep has found its kin in Beasts of the Frozen Sun: If you read and enjoyed the former, I enjoin you to pick up the latter (which I’d argue is better).

You can purchase Beasts of the Frozen Sun at Barnes and Noble, Books-A-Million, IndieBound, Indigo, and Amazon. 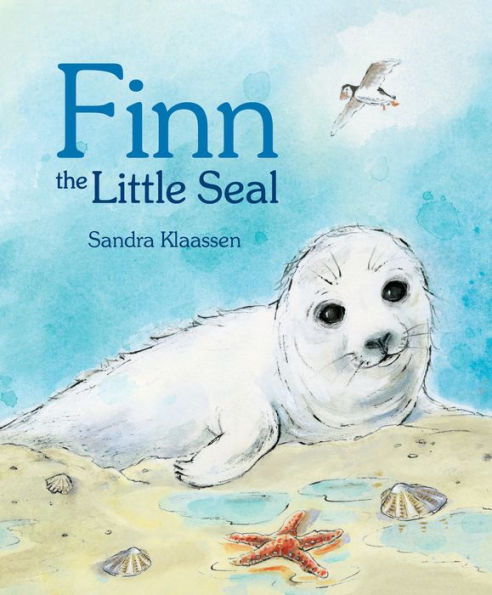 Thank you to Edelweiss+ for the free digital ARC.

Finn the Little Seal is a short story about stepping out of your comfort zone. As evidenced by the cover, it also boasts incredibly adorable illustrations! I would totally buy this for one of my little cousins.

On my seventeenth birthday, I wake up in the hospital to find I just survived a sketchy but terrible accident. My parents stand by my bedside—both are beautiful, wealthy, and super-nice. They tell me that once I leave the hospital, I’ll attend the prestigious ECHO Academy, where I’ll churn out equations for the government along with my mega-smart peers.

So, I’m living the perfect life.

Then why does everything feel all wrong?

My parents, my house and even ECHO Academy…none of it fits. Plus, what’s up with Thorne, my brooding yet yummy classmate who keeps telling me I need to remember my true past, which seems to have included a lot of us kissing? That’s one thing I’d really like to remember, except for the fact that I’m pretty sure Thorne is hiding a ton of nasty secrets of his own, including the fact that he may not be from this world. But considering how my own past seems alien to me, it’s not like I can judge. Plus, Thorne has dimples. That’s a problem.

And worst of all, why does it feel so yucky to work on these calculations for the government? It’s all supposed to be part of ECHO, but my heart tells me that I’m helping something truly terrible come to pass. Thorne seems to think that kissing him again will release my real memories.

Maybe it’s time to pucker up.

*Thank you to Edelweiss+ for the free digital ARC.*

Honestly, I expected little from Christina Bauer’s Alien Minds – and this book lived up to my expectations. I plowed through Alien Minds quickly, simply because it was tedious and jejune and I wanted to be done with it.

Alien Minds plays host to a plethora of flaws, least of which is the sloppy editing. Although the writing is legible, Bauer’s strong suit clearly does not lie in grammar and spelling conventions, nor does her editor’s strength lie in noticing and correcting them. Several words are missing letters, have their letters transposed, or contain letters that transform them into different words altogether. Take, for example, Meimi yammering into her “smart witch” (smart watch) and explaining her “thughts” (thoughts) to the reader, and Thorne’s name being spelled “Throne” at one point in the book. Errors like that, while obvious, are easy enough to parse out, but missing or jumbling words in sentences are more difficult to deal with.

Bauer also has a penchant for doling out the wrong amount of detail for the wrong subjects. Lush imagery and meticulously crafted lore are well and good, but it seems to me that Bauer gives more thorough descriptions of trivialities like clothing and appearances than of more important aspects of her story, particularly background information. Yes, I know Meimi is suffering from amnesia. Yes, I understand that some things will be left out as a result. That said, Bauer frequently just dumps readers into a scene, blathers about the sartorial choices of nearby characters or what color the walls are, decides, “Fuck it!” and then careens onward through her haphazardly assembled plot. To make matters worse, she tends to gracelessly insert information, frequently at inappropriate points in a scene. These interruptions compound with negligible buildup to events, adversely affecting the flow of the story overall. (Side note: In a futuristic science fantasy novel, never use the word “modern” when describing architecture. No one knows what “modern” means in the context of two-and-a-half centuries in the future.)

The characters themselves have little appeal. Characterization is anemic from the start, and there’s little character development to remedy that. Meimi is purportedly an adroit scientist, but readers don’t really get to experience her problem-solving – they just see the results. She’s portrayed as a perfect girl, a state of being established less by actions and events and more by statements about Meimi. Furthermore, Meimi is the queen of patent observations. More than several times she notes something completely obvious in the stupidest way possible. Thorne, her extraterrestrial love interest, isn’t a huge improvement. The son of an alien emperor, Thorne’s character centers around being in love with Meimi and dealing with his daddy issues, but mostly around being in love with Meimi. In fact, Thorne’s callow, near-constant exultation of Meimi is a major irritant. Thorne also has a creepy habit of smelling Meimi. Not catching a whiff of her scent in passing and remarking that she smells nice, but legit purposefully sniffing her. And when you sleep next door to someone, even if you’re concerned about their safety, it’s definitely obsessive to sleep on the floor directly in front of the door, not to mention imprudent. What if Meimi tries to run from danger and she opens his door and trips over him? Just sayin’. Their instalove romance is dull and moves way too fast. In one scene, while Meimi is still suffering from amnesia, Thorne purchases undergarments for her. Slow the fuck down, dude, she only kinda remembers you. Thorne is also overprotective of Meimi and, much to my vexation, calls her “my girl” about one million times throughout the book; Meimi, meanwhile, repeatedly chooses the term “yummy” to describe Thorne. This romance is so contrived that it would be fitting for Thorne to forgo the rose bouquet and instead gift Meimi an entire fucking bushel of corn.

So much of the story focuses on instalove that the supporting characters are glossed over, and the antagonists aren’t well-constructed either. Zoe and Chloe Fine are useful but only superficially entertaining; the Hollow’s backstory is glossed over. Vargas, a Merciless soldier charged with marking society outcasts for execution – often with the unwilling aid of his poor Pokemon, Marro – is little more than a death-hungry lech with muscles and a pea brain. Dr. Godwin is basically the alternate-dimension Dr. Doofenshmirtz: he’s genuinely evil but completely cheesy and absolutely not subtle.

When all is said and done, I wouldn’t read this book again, nor would I recommend it. Honestly, I probably wouldn’t have read it in the first place if it hadn’t been free. It’s definitely not my cup of tea, but if Alien Minds is yours, by all means, please read it.

You can also read this review on Goodreads: https://www.goodreads.com/review/show/2737340812